Lush, high protein pastures across the region are causing lameness and mastitis in sheep flocks, and proving a headache for many producers.
Livestock consultant San Jolly, of Productive Nutrition, said a natural zinc deficiency within sheep-wheat zone soils compromised skin integrity, which was further compounded by the sheep grazing high protein pastures.

"Grazing a pasture high in protein causes a histamine release (immune response) in the rumen which results in heating up of the feet and, if skin integrity is not good, it can lead to lameness," Ms Jolly said. 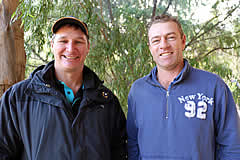 She advised putting affected sheep on lower quality grass-dominant pastures to dilute their protein intake, and adding zinc sulphate to water troughs, if zinc is found to be deficient from a pasture test.

"Pasture testing needs to go to the top of the list to get a handle on the mineral deficiencies occurring in late winter and summer."

Ms Jolly was the keynote speaker at a workshop held on Friday at Burrumbuttock, and hosted by the Southern Riverina Sheep Breeders group and Local Land Services.

Co-organiser Rod Frohling, Hovell Stud, Burrumbuttock, said the workshop was a follow-up to a pasture field day in April attended by about 50 wool and sheep meat producers.

Mr Frohling said a spin-off had been the formation of five Lifetime Ewe Management groups at Brocklesby, Burrumbuttock, Jindera, Gerogery, Walbundrie and Culcairn. 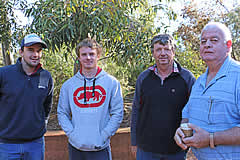 She said ewe management in the last 30-40 days of pregnancy was critical to avoid excess foetal weight.

"Protein intake must be constrained and single-bearing ewes supplemented with a low protein hay or grain, put in a paddock with grass-dominant pasture where possible," Ms Jolly said.

"The protein content of improved pastures, cereal and lucerne through winter can be as high as 30-40 per cent."

"On the other hand, if a foetus is starved of nutrients in mid-pregnancy, wool follicle and muscle cell development is compromised, resulting in lifetime wool productivity being negatively affected.

This results in dead patches in the pasture, particularly from cattle more so than sheep.

Ms Jolly said an accumulation of nitrate in broadleaf plants this winter was causing scours in sheep flocks.

She recommended feeding hay or straw to reduce scouring and slow the passage of feed through the gut.

She said mineral inbalances to keep an eye on included potassium and copper.

"Once potassium reaches the rumen, it reduces the amount of calcium and magnesium being absorbed into the bloodstream - grazing wheat is a big offender and it’s also inherently sodium deficient," Ms Jolly said.

Lime with the addition of 20 percent salt needs to be fed adlib to correct the calcium intake.

"In every state we are seeing an increasing incidence of copper deficiency, which may affect fertility and lamb growth. Do some soil and pasture testing to determine the mineral deficiencies on your property and seek advice to ensure cost effective corrective measures are applied."

Ms Jolly urged producers to take pasture cuts to measure dry matter production per hectare and match it with the stock’s protein and energy requirements.

Cereals can be measured with square metre cuts, taking into account row spacings, and sent to a laboratory for drying and weighing, which is more accurate than microwave drying.

"A 550kg cow with a calf will produce 5-10 litres of milk a day in peak lactation, while a 65kg crossbred ewe with twins can produce up to four litres a day.

Ewes are under a metabolic load so it is important to look after them to optimize their potential and increase your return on investment.

Hovell Stud is proudly supported by:

Hovell Stud chooses to use: